Trial - Your day in Court

"There is no substitute for Victory."
- General Douglas MacArthur - 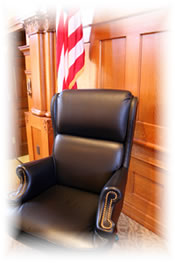 To protect your rights, the first and most important key to winning at trial is selecting a jury that will hold the state to such a high burden. In our day and age, especially since the War on Terror began, Americans have felt a willingness to yield some of our most basic values, most tragically our liberty values, in the name of law enforcement. This is, at first glance, understandable because of the dangers of terrorism, but we cannot forget that we are Americans and we don’t sacrifice our liberty for anyone. If we do that, then our enemies have already won a major battle against us. Along these lines, jury selection allows us to question jurors about their life experiences and find those who would be most sympathetic with police action and less loving of liberty, and those who hold strong biases against alcohol consumption. In a misdemeanor trial, the jury panel will normally consist of seventeen or eighteen prospective jurors, and each side gets three “preemptory” strikes - eliminating jurors for any cause or no cause at all, unless prohibited by law (prosecutors can no longer strike for race or gender). Before these strikes are used, each side gets as many “challenges for cause” as it can prove. However, to prove a challenge for cause, you must show that the juror has such a bias against a fact, a witness, the law or other part of the case that he or she could not fairly judge the matter. This is a tough standard, which is why it is all the more important to go to trial with someone trained for trial.

After jury selection, the judge will empanel or “swear in” the jury. At this time something magical happens. “Jeopardy” attaches, i.e. your right to not be prosecuted twice for the same crime kicks in, and if your trial ends for any reason before a verdict comes back (except misconduct on your or your lawyer’s part), you cannot be re-prosecuted for the same offense. This is another rare occurrence, but another possibility to be aware of. After the jury is sworn in, the judge will instruct them on their legal role as jurors, and then the state will read the arraignment against you. At this time you again plead “not guilty” to the offense, and the state gives its opening statement. After the state’s opening statement, the defense may give their opening statement or can wait until the state ends its evidence to put on our opening statement. The state then calls its witnesses, usually officers trained to be witnesses as well who will tell the jury why they think you are guilty of the crime. After the state questions their first witness, we get to cross-examine their first witness, again usually the police officer. Cross examination can get into any appropriate area that might discredit their testimony or judgment, show that they are biased, show that the tests which they relied on were not scientifically solid— pretty much anything to help raise a reasonable doubt or discredit the state’s evidence or witnesses. Next to jury selection, cross examination of the state’s witnesses is the most important job a criminal defense lawyer performs. This is where you score the most points with the jury - proving the problems with the state’s case through the state’s own witnesses. This is what made lawyers like Percy Foreman and Racehorse Haynes famous, and it may be the most difficult part of a defense lawyer’s job (picking a jury in 30 minutes is tough, but both sides are typically limited to the same time frame at jury selection). This is another important reason that you go to trial with a trial attorney - one who is trained to do these jobs effectively.

During direct and cross-examination, the judge makes rulings based on what is appropriate in the case. These rulings are strictly legal rulings, but jurors can start to take notice if a lawyer objects too much because they can believe the lawyer to be “hiding something.” Thus, trial attorneys are trained only to object when necessary to the case. After direct and cross of the state’s witnesses, the defense lawyer should move for a directed verdict of acquittal, which can be granted if no reasonable jury could find for the state on all elements of the crime. After this motion, defense may make its opening if it reserved opening, may put on evidence including putting the defendant on the stand if necessary and strategic. However, the defense may simply rest because the entire burden of proof is on the state. At the end of the defense’s case, the judge gives the jurors their “charge” - the law that the jury will use in coming to a verdict. Then, each side makes its closing arguments, with the state going last if it desires because it has the burden of proof. The jury then retires to the jury room to deliberate, and if the state has not proven its case to the jury beyond a reasonable doubt, the jury should return with a verdict of “not guilty.” The jury verdict must be unanimous, so the state must prove its case to all six or twelve jurors beyond a reasonable doubt to secure a conviction.